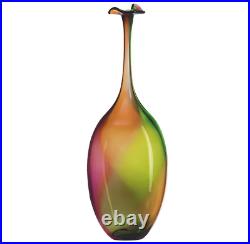 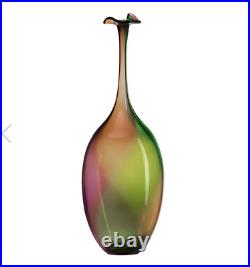 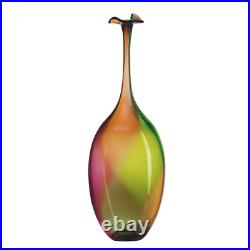 A free-blown bottle in shimmering waves of color. As delicate as air, ethereal bubbles inviting the touch. Freehand blown, no two vases are ever alike.

Fluid, fascinating, and beautifully prismatic, the Fidji bottles from Kosta Boda capture the strange and elegant power of glass at its best. Designed by artist Kjell Engman, who is known for his play with refraction and light, the pieces are both vivid and peaceful, thanks to an interplay of colors and effortless form.

Created in three heights, each of the bottles blends multiple hues while allowing for a dominant note in each size. Standing 17-3/4 inches high, this bottle is both warm and cool in tone, with green taking center stage.

The finish on the piece is glossy, and the flat rim has a soft, organic frill. Made by hand in Kosta Boda's Swedish glassworks, each edition of the bottle is distinct in its particular details, so you can be assured that your version is unique. Completely lead-free, the bottle stands alone with ease or coordinates with the smaller Fidji pieces.

Born in 1946, Kjell Engman has been retained by Kosta Boda since 1978 and has a studio at Boda glassworks. A tirelessly productive visual artist with unbounded imagination and a passion for narrative, Engman finds free expression through both utility glass and art glass.

He gets his inspiration from the most diverse sources, not least from the animal kingdom and the world of music and entertainment. He often works on large installations in which he also combines elements of sound and light. Frequently commissioned for public works both in Sweden and abroad, he is personally responsible for one fifth of Kosta Boda's catalogue range.

With characteristic craftsmanship and good design, Kosta Boda has become one of the leading glasshouses in the world. The company's three glassworks in the villages of Kosta, Boda, and Åfors each have exciting individual stories of their own yet stand together under the common brand name Kosta Boda. The corps of designers currently on retainer at Kosta Boda works with both utilitarian and art glass. Glass results from a great many meetings between people--artists, craftspeople, and lovers of glass. The artists of Kosta Boda have a decisive role to play in all the creative stages of the process.

The cooperation between the designers and the skilled craftspeople is very close; indeed, it is essential if the designers are to transfer their intentions to the glass. The History of Kosta Boda. Kosta, the parent glassworks of Kosta Boda and the oldest glassworks in Sweden still in operation, has a fascinating history that forms a valuable part of Swedish cultural heritage. The glassworks was founded in 1742 by the governors of the counties of Kronoberg and Kalmar, Anders Koskull and Georg Bogislaus Stael von Holstein, both former generals in the army of Karl XII and distinguished veterans of the battle of Narva, among others. The two county governors founded the glassworks upon the instructions of Fredrik I and modeled it on Continental glassworks.

The works was situated deep in the spruce forests of Småland, on a site midway between the two country towns, and near a village that was then known as Dåfvedshult. The main reason for choosing this location was the unlimited availability of wood.

Enormous quantities of wood were naturally required to keep the glassmaking furnaces burning day and night. Both of the founders wanted their names to be remembered, so the works was christened Kosta, from the initial letters. Of the surnames of both the Carolinian generals. After a time the entire community was renamed after the growing glassworks.

During the first 150 years, the glassworks in Kosta produced only utility glass, including window glass for the building of Tessin's Royal Palace, bottles and glass for the royal household, and chandeliers for churches. The first glassblowers were immigrant glass masters from Böhmen. They became the founding fathers of the glassblowing families, which passed down craft skills from generation to generation.

Swedish sand was used to manufacture crystal glass, but nowadays pure silica sand is imported from Belgium, since the Swedish sand contains iron oxide that gives the glass a green tinge. Under the management of glass masters from Kosta, a succession of glassworks sprang up in the forests of Småland in the regions around Växjö and Kalmar.

Kosta therefore has good reason to call itself the parent works of the entire Swedish Kingdom of Crystal. Until the end of the 19th century, the glass from Kosta was designed by the glassblowers themselves. At the Stockholm exhibition in 1897, the glassworks was criticized for the uniformity of its glass, which led to the idea of enlisting designers and artists in production. The first designer to be employed by Kosta was Gunnar Wennerberg. Ever since then a large number of artists and designers have enriched the glassmaking tradition of the works with their artistic talents.

Today Kosta Boda has a unique right to describe itself as an art industry, in which designers and craftspeople work closely together in the ongoing development of handmade utility glass and art glass. This diversity of individual artistic expression and the free and uninhibited creative process have become the distinguishing characteristics of the Kosta Boda brand.

In addition to the parent works in Kosta, Kosta Boda today includes the two "daughter works" of Boda (founded in 1864) and Åfors (founded in 1876), a partnership that was formed in 1964. Both Boda and Åfors were originally relatively simple glassworks that manufactured utility glass. Boda experienced a period of glory in the 1960s and 1970s, under the innovative and dynamic artistic leadership of Erik Höglund, a heritage carried on by Kjell Engman and Monica Backström. Åfors has been the home of the designer couple Ulrica Hydman-Vallien and Bertil Vallien, who, together with Gunnel Sahlin and Olle Brozén, brought a renaissance to the small glassworks and local community. In 1990 Kosta was acquired by its former competitor Orrefors.

Orrefors/Kosta Boda was in turn acquired by the Danish company Royal Copenhagen in 1997, and the design group Royal Scandinavia was formed. The group also includes Georg Jensen, Royal Copenhagen, and Holmegaard. Colorful, handmade art glass from the works in Kosta, Boda, and Åfors have made Kosta Boda one of Sweden's strongest brands and one of the world's leading glass companies. The origins of this glass, the living tradition of craftsmanship developed in the glassworks in Kosta, Boda, and Åfors, is a heritage that every Swede has a right to feel proud of.

Taking Care of Kosta Boda Pieces. Handmade and hand-painted glass (especially the latter) does not do well in the dishwasher.

Wash by hand in hot water--though not too hot--with a little washing-up liquid. Washing in very hot water will eventually destroy the luster of the glass.

Rinse in water of about the same temperature as you washed it in. To avoid cracking the glass, make sure you do not expose it to excessive temperature differences. To avoid lines, dry with a soft cloth that won't shed lint. The edge of the glass is its most fragile part. When you put the glass back in the cupboard, stand it on its foot and make sure the edge does not come into contact with other glasses or objects. The Mark or Signature on Kosta Boda Pieces. Products are marked with the words.

The name of the artist, and the article number (seven digits). Painted pieces are signed with a painted signature with the designer's and the painter's initials. Engraved pieces also have the engraver's signature near the designer's name.

Besides designing glass for the regular Kosta Boda collection, our artists are also free to work with art glass--limited-edition, specially signed pieces that are often much sought after by collectors. Kosta Boda art glass is divided into two categories: unique pieces and limited editions.

Unique pieces are, of course, just that. No more than one piece is made of any particular item. Limited editions are manufactured in runs of between 25 and 1,000 pieces. All art glass is marked with the product number, the name of the artist, and the size of the edition so that the purchaser will know exactly how many pieces there are in that particular series. Editions comprising less than 60 pieces are individually numbered, e.

This item is in the category "Pottery & Glass\Decorative Pottery & Glassware\Vases". The seller is "tdifanatic" and is located in this country: US.