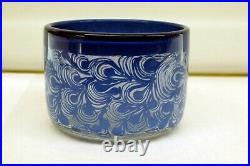 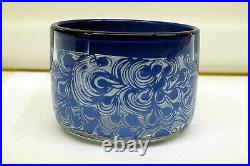 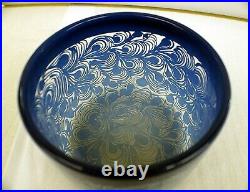 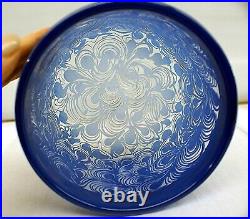 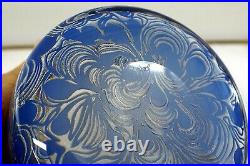 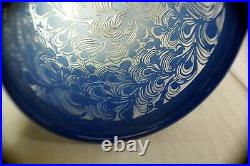 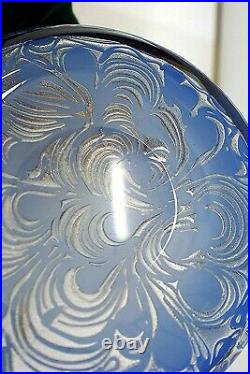 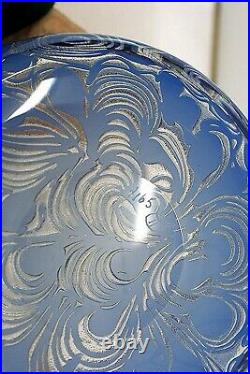 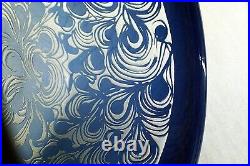 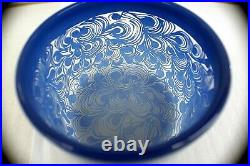 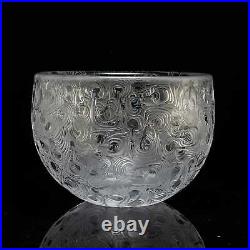 BODA-Afors, Sweden Carved Crystal Bowl One of a Kind by BERTIL VALLIEN c. This is a MONUMENTAL piece of Hand Made Art Glass from the BODA - AFORS Factory in Sweden Created and designed by the hands of BERTIL VALLIEN c.

1967 Each of VALLIEN's pieces is Limited Edition and because they are made by hand there are no two alike. A very similar adaptation of this Vase is pictured right now on the VENINI website Their photos are attached. The term sandcasted glass has come to to be inextricably linked with Bertil Vallien. He took up and developed this originally industrial technique (used, for example, in metal casting), and motifs.

It began with his discovery of the light-absorbing property of glass in the 1960s-70s in which hot molten glass is poured directly in a preformed mold made out of sand. Since 1963, he has been associated with the Åfors BODA glass-factory in Sweden where he has continued to pursue and develop his creative work. He was also responsible for the reorganisation and updating of working procedures, and for expanding the role of the artisans, where the main emphasis is on artistic skill.

During the 1990s, Bertil Vallien sought to simplify his forms, cognizant of the obligation that the beauty of glass imposes. This potentially dazzling substance is a hindrance to his artistic resolution; but instead of reverting to stone, or any other unyielding medium, he has sought to tame the glass. His gleeful (much quoted) utterance from the early 1980s, "glass eats light", has been a guiding principle in all his artistic endeavours ever since. In the search for synthesis between light and form, the human head was a perfect medium for realising those intentions.

The light-absorbing glass also acts as a skin or membrane, allowing vision into the spaces within. It is a quest for the unearthly light - ethereal, and ever elusive. Bertil Vallien is one of the few innovators of glass art in the world today. Along with a small number of other artists, he has broken new ground and his work has been particularly well received in the USA, where he exhibits and lectures at the universities on a regular basis; also in Japan and Australia.

Bertil Vallien is a contemporary Swedish artist, best known for his uncanny, ethereal sandcasted glass sculptures. His works are mystical, coded representational forms that evoke the aesthetics of Primitivism, archeology, and ancient runes. Often featuring haunting faces or figural forms, Vallien's sculptures are manufactured melding material with process in complex ways that return to the Functionalism and the populist roots of Modernism.

Born in 1938 in Sollentuna, Sweden, Vallien studied drawing early in his life at the Konstfack School of Arts, Crafts, and Design in Stockholm before pursuing an interest in ceramics throughout much of his youth. By the 1970s, Vallien had switched entirely to glass. Vallien has exhibited around the world, and his work is in numerous public collections, including the Heritage Museum in St. Petersburg, the National Museum in Stockholm, the Victoria and Albert Museum in London, the Art Institute of Chicago, the National Museum of Modern Art in Japan, The Metropolitan Museum of Art in New York, the Powerhouse Museum in Australia, and the Museum of Fine Arts, Boston. For more than 40 years, Swedish artist Bertil Vallien has been an innovator of contemporary glass art.

Through his command of the material, he beckons the viewer to explore a deeper dimension and awareness of lifes truths. Every sculpture conceals an existential or mythical story about life, love and or death. Along with a small number of other artists, he has broken new ground and his work has been particularly well received in the USA, where he exhibits and lectures at the universities on a regular basis; but also in Japan and Australia. This voluptuous monumental Bowl - Vessel was clearly handmade Curvaceous from every angle The color is a deep rich Sea Blue and the interior carving out of the glass forms waves of circles and swirls creating shadows and highs and lows in the coloration The coloration is truly magical. You can feel the texture of the carving with your fingertips, on the interior They are textural and dimensional. Dimensions: 5" Tall x 6 3/4" Wide Diameter The circumference at the widest point is 20 around This is a formidable Exquisite piece of Collectable Art Glass This is a One-Of-A-Kind piece, as it was made completely by hand. It is in Perfect NEW CONDITION with no flakes, chips, cracks or repairs. It has been sitting on a shelf for over 50 years - but has never been used for anything but display. PLEASE CHECK OUT OUR OTHER AUCTIONS WE SPECIALIZE IN DESIGNER ACCESSORIES for YOU and YOUR HOME! Every Item is authentic and exactly as represented! The item "BODA AFORS by Bertil Vallien c. 1967 Hand Carved Limited Edition Large Bowl" is in sale since Friday, February 28, 2020. This item is in the category "Pottery & Glass\Glass\Art Glass\Scandinavian\Kosta Boda". The seller is "trycomp" and is located in Personal Shopper USA. This item can be shipped worldwide.