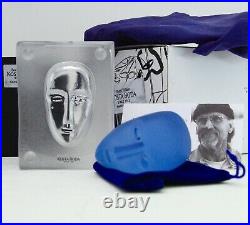 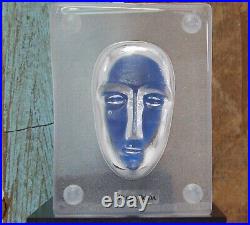 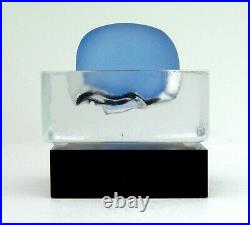 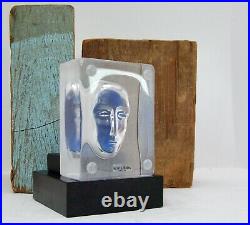 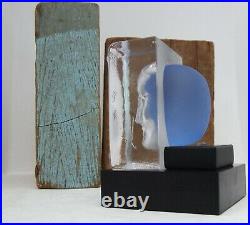 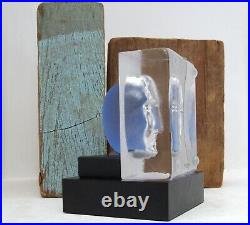 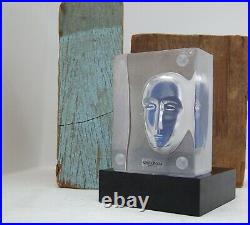 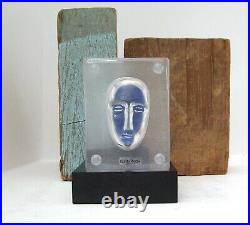 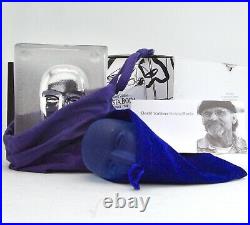 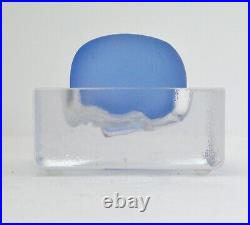 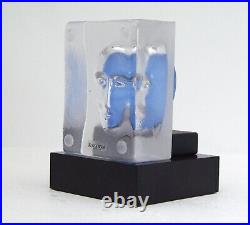 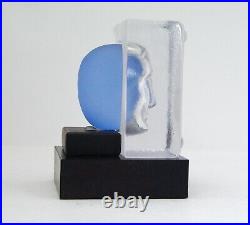 Head: 80mm x 50mm x 6mm. Condition: Very Good Displayed Condition. No Scratches chips or marks, unique sand casting. I like to work with themes in my glass art. In the glass, there are opportunities that. No other material can offer. You can do everything: traces, light, heat, and cold. Piece One - a small but heavy ice like sand cast block sculpture with. Frosted textured back and bottom clear front, sides and top with runs and texture. The blocks silver see through sand cast indented head and face join with. Piece Two - the legendary blue Karolina Resting Head/Brains. Hopefully the photographs speak for themselves. These two sculptures join together as if mirroring a newspaper story Bertil Vallien. Read on a bus about Karolina and her mysterious fate that inspired his original blue. Heads and exhibitions, story below.

The Karolina Head has a very small dent in it. Intentional or just a part of the sand casting process that makes all the pieces unique. Or perhaps mirroring the story?

When I bought this set I liked to think the latter. This could be a one-off idea that was developed into something else, it certainly has. Similarities to the rare 1990s Karolina Head and Cell or the extremely rare Heart Shaped. Like other unsigned one-off sculptures this could only have been. Made in Bertil Valliens Atelier, nobody can compete with the great Swedish.

A rare find as one piece or two separate sculptures that work. Well on their own and together? I have enjoyed them as both. Karolina Olsson's strange fate: According to the newspaper, the fourteen year old Karolina. Was out on the ice outside Öland in 1876. She slipped and hit her head so hard that she. Karolina is said to have remained unconscious for 32 years. She finally woke up in 1908, she told tales about great long-lasting darkness and the. The story of Karolina inspired Bertil to create an exhibition of blue heads in Borgholm's castle. Ruin, near the place Karolina had fallen on the ice. The weathering ruin contrasted with. The spiritual expressions of the heads.

The exhibition in Borgholm was followed by. International exhibitions in Seattle, Sydney, Venice. And many more Galleries worldwide. Bertil Vallien pioneered sand casting in the 1980s and began creating sculptures. In glass that inspired his now famous quote: Glass eats light.

Sand casting is a process. That involves pouring molten glass into a hand crafted mould whilst adding detail, it is a. Highly skilled and perfected process.

The coloured glass is also allowed to form its own. One off blend of colours bubbles textures and shapes during the pouring, settling and. Lengthy cooling process, no one piece is ever the same, every sculpture is unique even. If it isn't from a limited edition series. This like many of Bertil Valliens sculptures may have a spiritual and symbolic.

Expression which we can choose to engage with or not, they often raise questions of. The works frequently portray narratives and mythologies, many of which. Are drawn from ancient Viking sagas, stories, myths and from many different faiths and beliefs. His work offers the opportunity to ponder so many things, perhaps we personally connect.

With a piece or just simply enjoy it as a wonderfully crafted precious and. Glass is an invisible material that eats the light and forwards it. Material is so volatile and wayward. That's why I'm so fascinated by it. The item "Bertil Vallien Kosta Boda Karolina and Ice Block Sculpture" is in sale since Sunday, April 18, 2021.

This item is in the category "Pottery, Porcelain & Glass\Glass\Art Glass\Scandinavian\Kosta Boda". The seller is "revdks" and is located in Worthing, West Sussex. This item can be shipped to United Kingdom.